Edie Digby nee Macknight spent most of World War I living on her own, her husband and both sons having joined the military. From her home in Neutral Bay, as she listened to the troopships crossing the harbour, she wrote, every mail, to her three beloved men. Sometimes she had very short notice that a ship was taking mail and her letters were only a page or two long. Then there were times when no mail went out for some time, and her letters, written over days, extended as time went by.

Many letters to Gerald survived, over one hundred of them, those that did not get lost in the huge quantity of mail heading to Egypt and Europe and Britain, those that did not go down in sinking ships and survived to tell of Edie's life in Sydney.  She had never lived on her own before, and had to take over those jobs that were traditionally men's, as well as see to her domestic chores and, from the beginning to the end of the war, she threw herself into war work, mainly for the Red Cross. In a Sunday Times article titled "Ardent in Works of Peace and War", Edith was described  as "a capable organiser with business ability, a model housekeeper, an expert needlewoman, and clever artist, a practical philanthropist and ardent patriotic worker". She was the ideal model put forward by those who supported the British Empire, "one of the noble, unselfish women who have responded to the demands of the Great War with a courage born of a keen sense of duty” who has "sent her menfolk forth, not counting on the sacrifice or cost, while she always keeps watch and wait in her cottage home in North Sydney".

This was the public Edith, but her letters and diary show the physical and mental effects the war had on her, dealing with uncertainty of the whereabouts of her men, if they had been wounded or worse still, had lost their lives. She had to battle with feelings of helplessness at being denied her role of wife and mother. Thus her constant stream of letters and parcels of "comforts" - food, reading material, musical instruments and sheet music, cigarettes, clothing, and practical items like candles and mosquito netting.  During all this time the letters she wrote and received  were her lifeline, reassurance that her husband and sons were still alive and would return to her safe and well.  Her  outgoing mail to Everard, John and Gerry was written in the hope of making their lives a little more bearable, making sure she provided whatever might be needed or was requested, for it was the least and the most she could do to fulfil her role as wife and mother from such a distance.  They also show the changing attitude she had to the war as the years passed, as the numbers of young men she knew lost their lives or were badly wounded, and more of her friends were besieged by grief.

The following journal is compiled from Edie's letters. After trying a number of different formats this was the one that worked best, so I have taken the liberty to use her voice to tell her story using a different structure. This is Edie's story of a dreadful time in the lives of people all across the world.
Digby 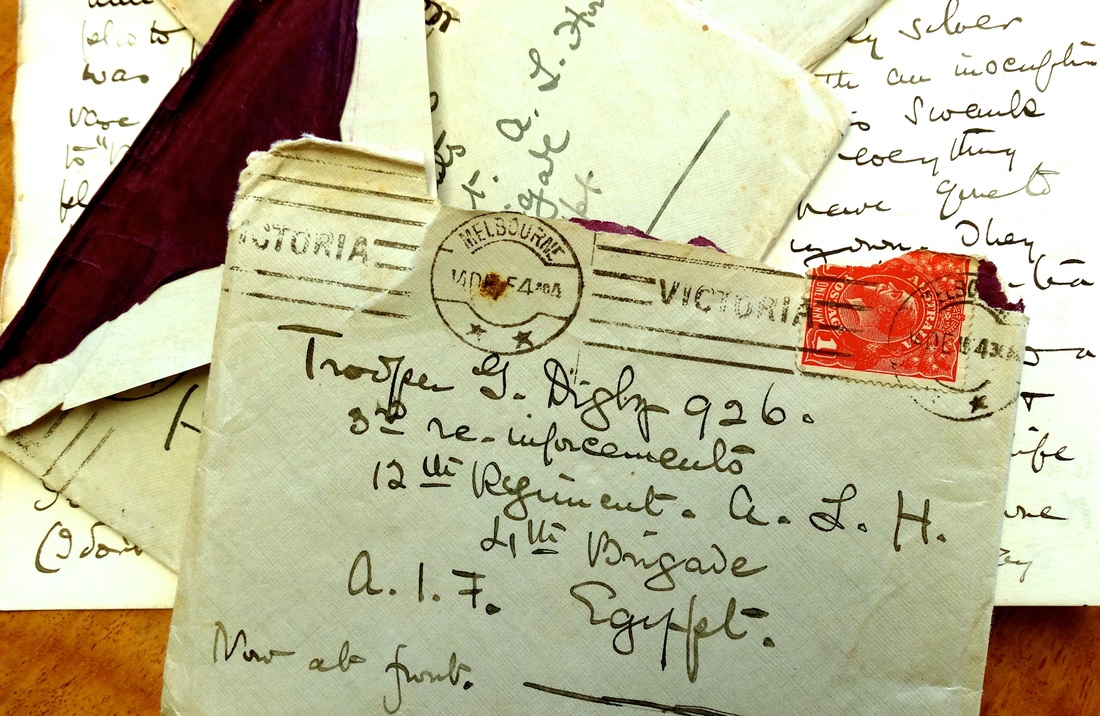