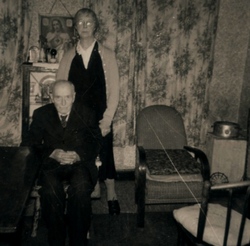 Lizzie & John Smyth, 1961
The Big House was almost invariably the centre of the workers' world with its own hierarchy, yet despite the comparative grandeur of the homes. money was frequently in short supply. By the year George and Kate married,  one quarter of Irish landlords were either insolvent or on the edge of bankruptcy.  George left his estate, the lands of Cloonegeragh, Lisnalton, Kilroosky and Drumdaff, to his wife and children as Tenants in Common. Records show that in November, 1856, only weeks after George's death, over two hundred acres of Digby land were offered up for sale.

The Digbys employed many people to run and work their lands, including families at Drumdaff on its 269 acres.  To some workers the Irish Big House represented oppression and to others security of employment and identity.  In a series of wonderful letters written in the 1960's by Lizzie Smyth, nee McDermott, to Everard's son, Gerald and his wife Frances in Australia, Lizzie paints a fascinating picture which brings all those people of Drumdaff to us today, the lives the workers, the tenants and the Digby family, as the following excerpts from her letters recall her life on Drumdaff as a child,  in beautiful detail.

Whilst children of the tenants attended local schools, they only did so when they were not needed at home to help with farm work. Most left school early and took their place alongside their mother or father as an extra pair of hands, for survival was the priority.

In stark contrast, while their sisters stayed at home,  Everard and George were sent away to boarding school in England, to the Jesuit run Stonyhurst College in Lancashire. While George's academic record is not known he must have done well as he gained entry to Medicine at Trinity College, Dublin. Their education was a classic one, covering such subjects as languages and philosophy. Everard won the Matriculation Prize in 1874, for which he was awarded a book, "Elementary Treatise on Natural Philosophy" by A. Privat Deschanel, a tome about the importance of physics which is difficult to imagine being read today by any school leaver.  A Certificate of Honour from the University of London reveals he was placed no less than forty-third in the honours division.  Everard was a prolific writer, and many notebooks, plays, poetry, essays, letters and personal records survive from his lifetime, often written in one of the languages he learnt at Stonyhurst.

After matriculation Everard returned to Drumdaff to find his mother Kate with charge of the property on her shoulders.  Her brother and nephew who were supposed to be sharing the responsibility, he identified as "useless drunkards". Thus Everard found himself with the job of  agent and manager. According to his memories of this time, written eight years on, for the next three years he fell into a country life "uneventful and unprofitable", a life diversified by cricket, hunting and shooting.  The postcards below right show there were plenty of hunt meets to choose from.

Sale of the Digby Lands

When Mary moved to Dublin she and Everard, as absentee landlords, were faced with the question of what to do now none of the family was actually living at Drumdaff.  Whether it would be sold or leased was the question, considering it had been the Digby home for generations.  They had to take into account that Everard was the only child of Kate and George who had children and they lived in Australia, on the other side of the world.  Despite Mary not wanting to let go of Drumdaff, they eventually came to the decision to sell it, and to this end they appointed a Land Agent, Mr W. E. Holmes of Dublin and Roscommon, to oversee the sale.  There followed protracted negotiations with existing tenants who wished to purchase land to work it for themselves. In a letter to Everard, Holmes wrote:

I had a long talk with your sister Mary the other day and I think she agrees with me that if we can sell the Drumdaff Estate on the figures which I
am about to give you, it would be much better to do so...I propose to sell to small tenants for 21 and a half years purchase on first term rents
which would amount to £8,997  and I propose to sell Drumdaff to O'Hara if he will purchase it, or else some other party for £4,500.

An ongoing exchange of letters  shows a long debate about who the lands would be sold to, and then the difficulty arose of getting tenants to agree to the terms proposed. The process began in 1904 and took over five years, with sale eventually going through the Estates Commissioner.

We enclose your Affidavit which it will be necessary for you to swear...We believe the purchase money of the Estate will this day be lodged in the
Bank of Ireland where it will be placed on Deposit Receipt until the Judge orders payment...March 22, 1910

Lizzie Smyth remembers the change of owners of Drumdaff.

I was twelve years old when the Digby's left Drumdaff and the new owner, "O'Hara", took over with a man servant - he looked over sixty years;
was a great farmer re cattle and sheep, but no fine work like flowers; he let the sheep graze over the pleasure ground Miss Mary and I tended
with such care. Mr and Mrs O'Hara took over the front seat of the church which had been the property of the Digby family.

Amongst the Digby's family papers is a collection of newspaper cuttings in which is a poem 'The Durham Cattle Drive' signed by Echo of Kilbride, both paper and date unknown. It is a poem about the greed of landlords driving people off the land and out of Ireland on coffin ships, but one verse stands out as pertinent to this story.

My thoughts revert to Drumdaff, which Digby late had sold,
Who must have prized his country's looks above the grasp of gold.
He sold the land just at its worth and left his grove of trees
As heirlooms to his tenantry to guard them as they please. 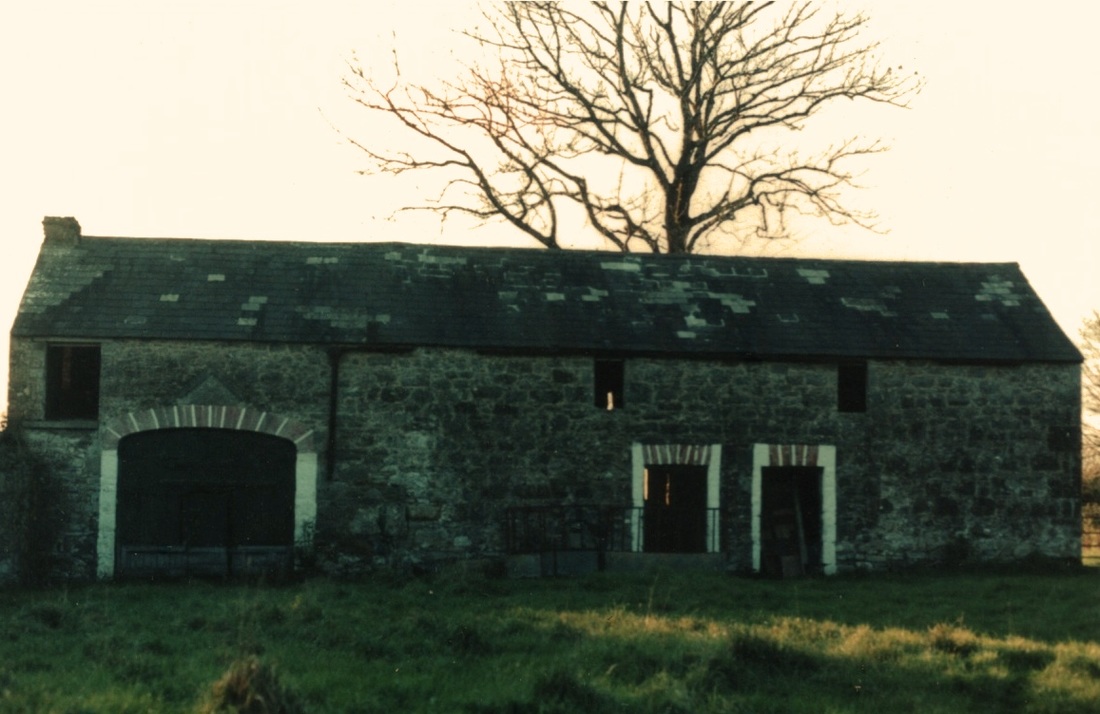 Outbuilding, Drumdaff, 1990. In the triangle above the stable door is carved the Digby family crest.
Continue...